Light the virtual candle
gallery
Edit the description of the cemetery
add photos
number of votes 0
A beautiful cemetery
Return to the main page
War Cemetery No. 358 - Laskowa - a war cemetery from the First World War, located in the village of Laskowa, in the municipality of Laskowa, in the MaĹ‚opolska province. It belongs to the X (Limanowa) Circle of the Cemetery Graves C and K. Commandant's Office in Krakow. It is one of 400 cemeteries of this branch, of which there are 36 in the Limanowa region. [source: Wikipedia, 2294617]
Position
It is located in the old parish cemetery on the hillside above the church. A road and a path planted with trees lead from the church to the cemetery. The cemetery is located about 100 m from the church, on the border of cultivated fields and a steep, wooded slope, at an altitude of 360 m above sea level [source: Wikipedia, 2294617]
History
Soldiers of all three fighting armies here were buried here: Russian, Austrian and German, who died in this area at the beginning of December 1914 during the Luckan-Limanowa operations. This operation ended with the victory of the Austrian troops, which stopped the Russian offensive towards Krakow and Silesia. Similarly to other cemeteries in Galicia during the First World War, it was made during the war. It came to this in 1915, immediately after the victory of the Russian army farther east as a result of the Battle of Gorlice, victorious for the Austrians. The number of soldiers buried is not exactly known, it is estimated at 98-110. Original tablets with the names of 36 soldiers and 4 unrecognized German and Austrian armies survived. 53 Russian soldiers are buried in the collective grave. Among the fallen soldiers are: * soldiers of the 5th Regiment of Hussars Hungarian National Defense * soldiers of the 17th Infantry Regiment of Common Movement Among the fallen there are soldiers of Polish nationality. [source: Wikipedia, 2294617]
Description of the cemetery
It is a small cemetery on a polygon plan (area 188m 2 ). It is surrounded by a very solid wall of stone. The wall is covered with a concrete roof. Entrance through a gate closed with a cast iron gate. In the middle of the cemetery one old oak. Because the cemetery is located on uneven terrain, it was wyplantowany in the form of terraces of different heights. Gravel paths and concrete stairs are made. The main decorative element is a granite inscription wall located in the wall from the south side and topped with a cross, and in it in a semicircular niche, a granite inscription plate. On the board, an inscription in German: Death sacked us to the ground, now gather the harvest. In addition to her are two cast-iron Latin crosses and one lotarian on concrete plinths. The soldiers' tombs are placed in one row by the wall on the long side of the cemetery. On the graves there are concrete steles crowned with cast iron crosses and plates with the names of soldiers. In the eastern corner of the cemetery, a plaque commemorating the inhabitants of Laskowa who died in 1939-45 was mounted. In the years 1992-1997 the cemetery was renovated. In 1993, he was included in the list of immovable monuments of the MaĹ‚opolskie Voivodeship. [source: Wikipedia, 2294617]
gallery
⮜⮿⮞
••••
Wikipedia, Self-published work, World War I Cemetery nr 358 in Laskowa 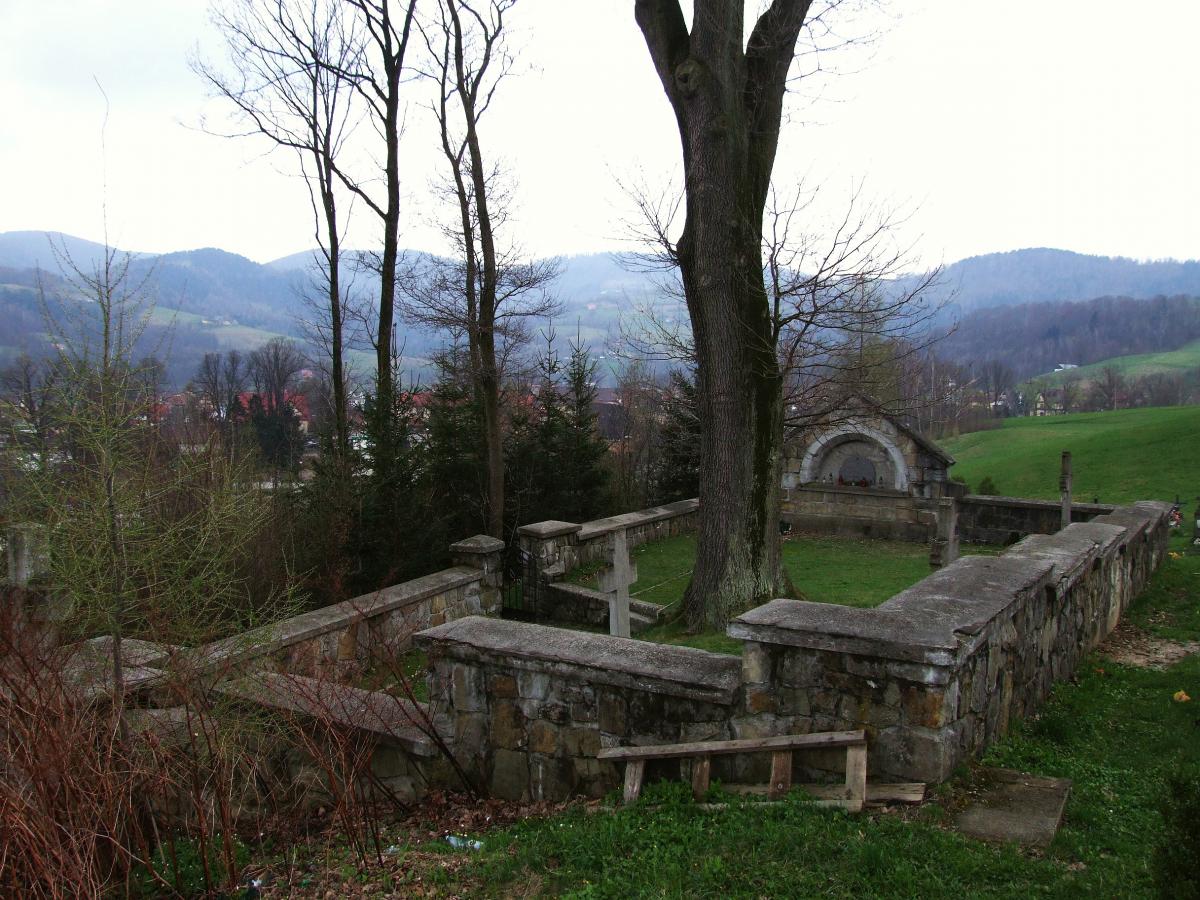 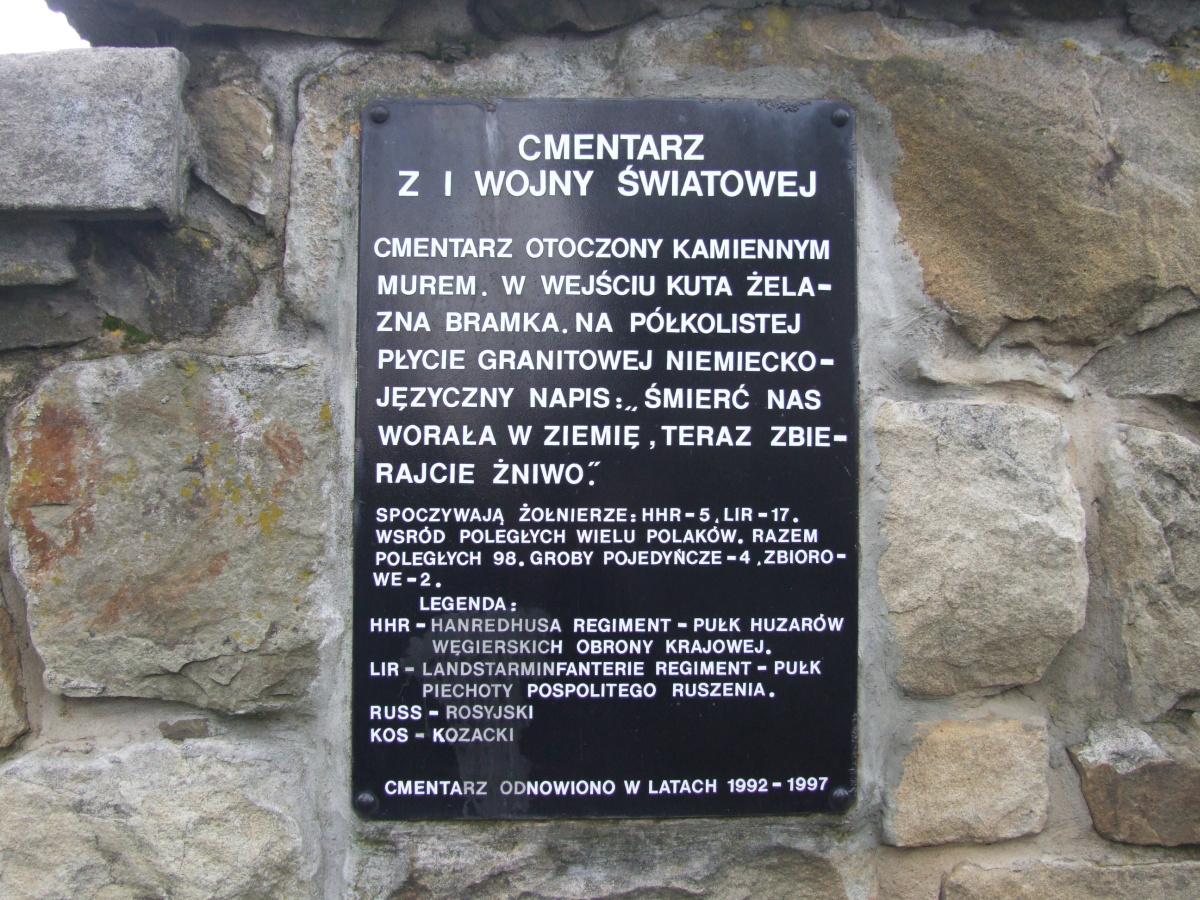 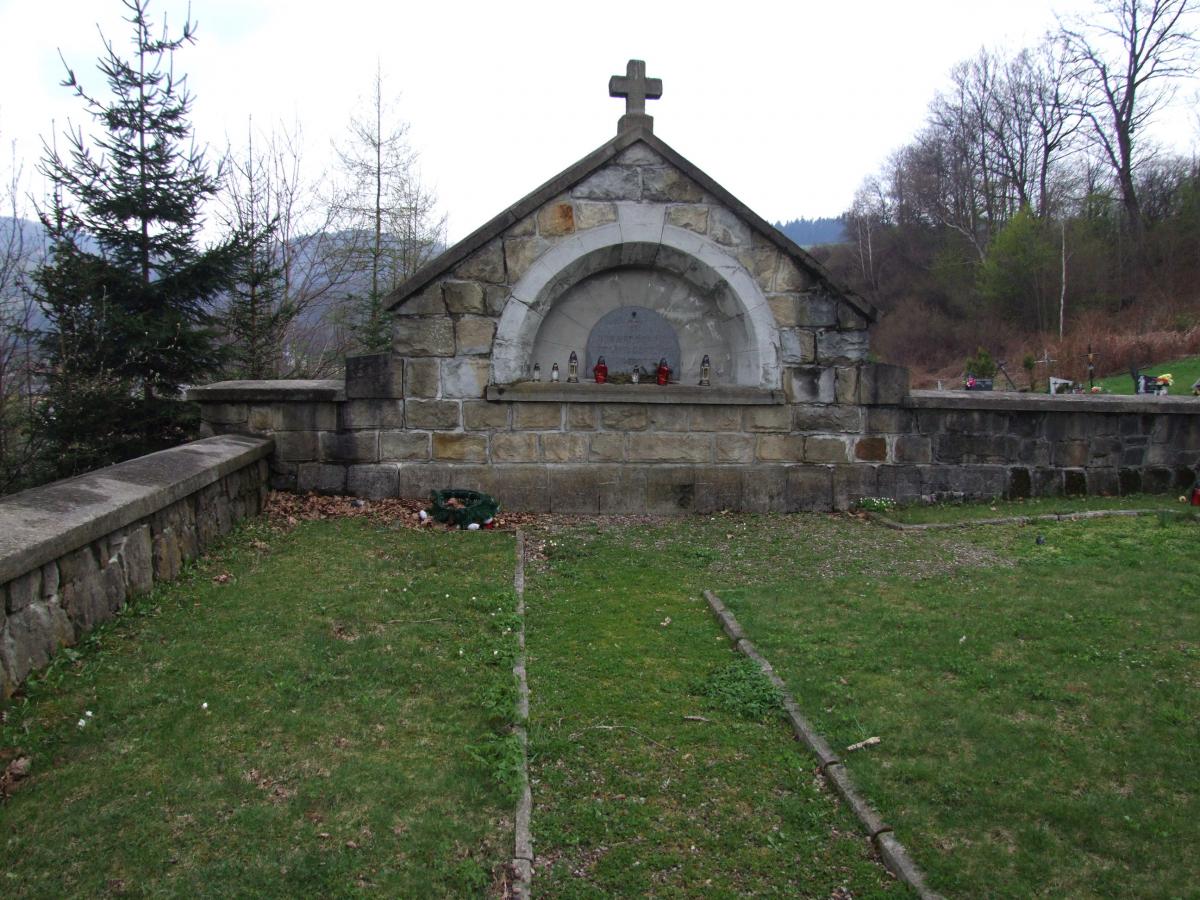 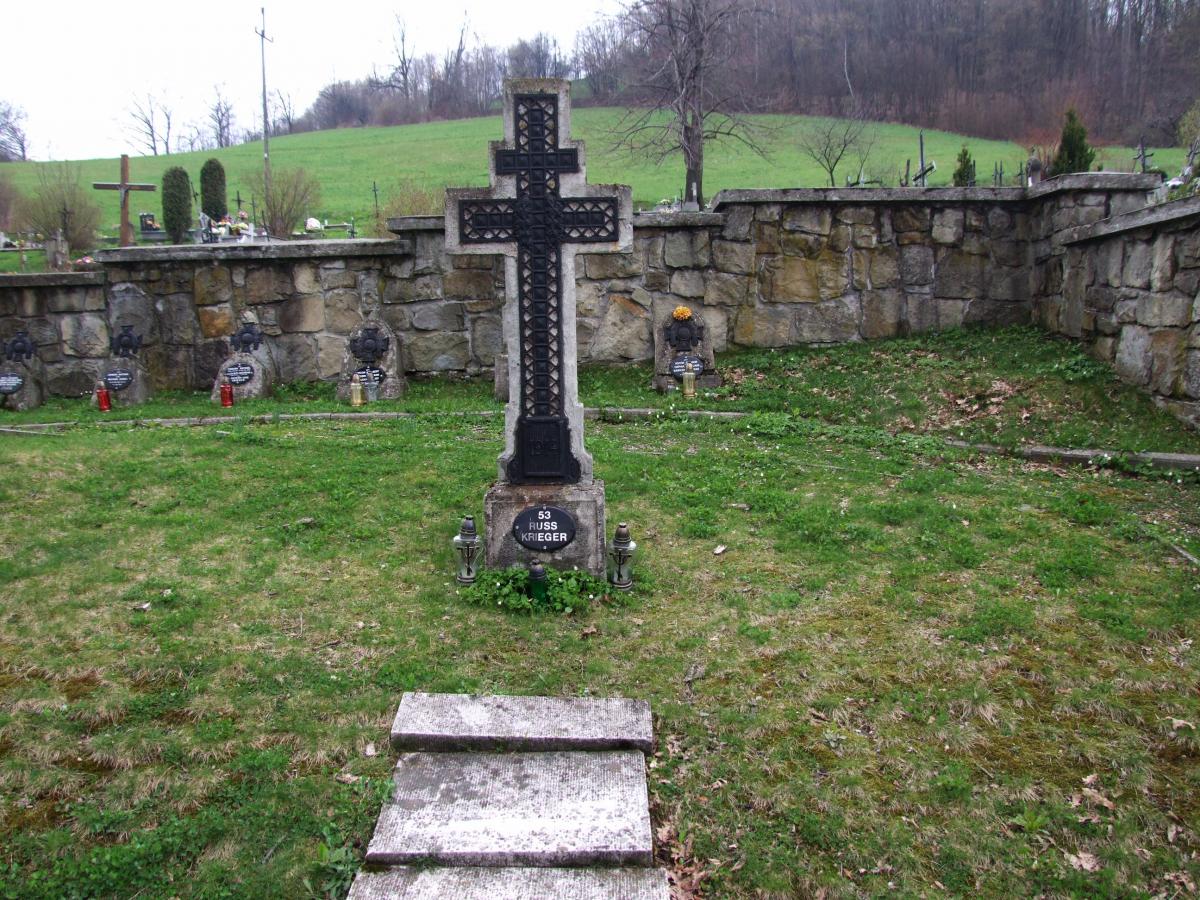 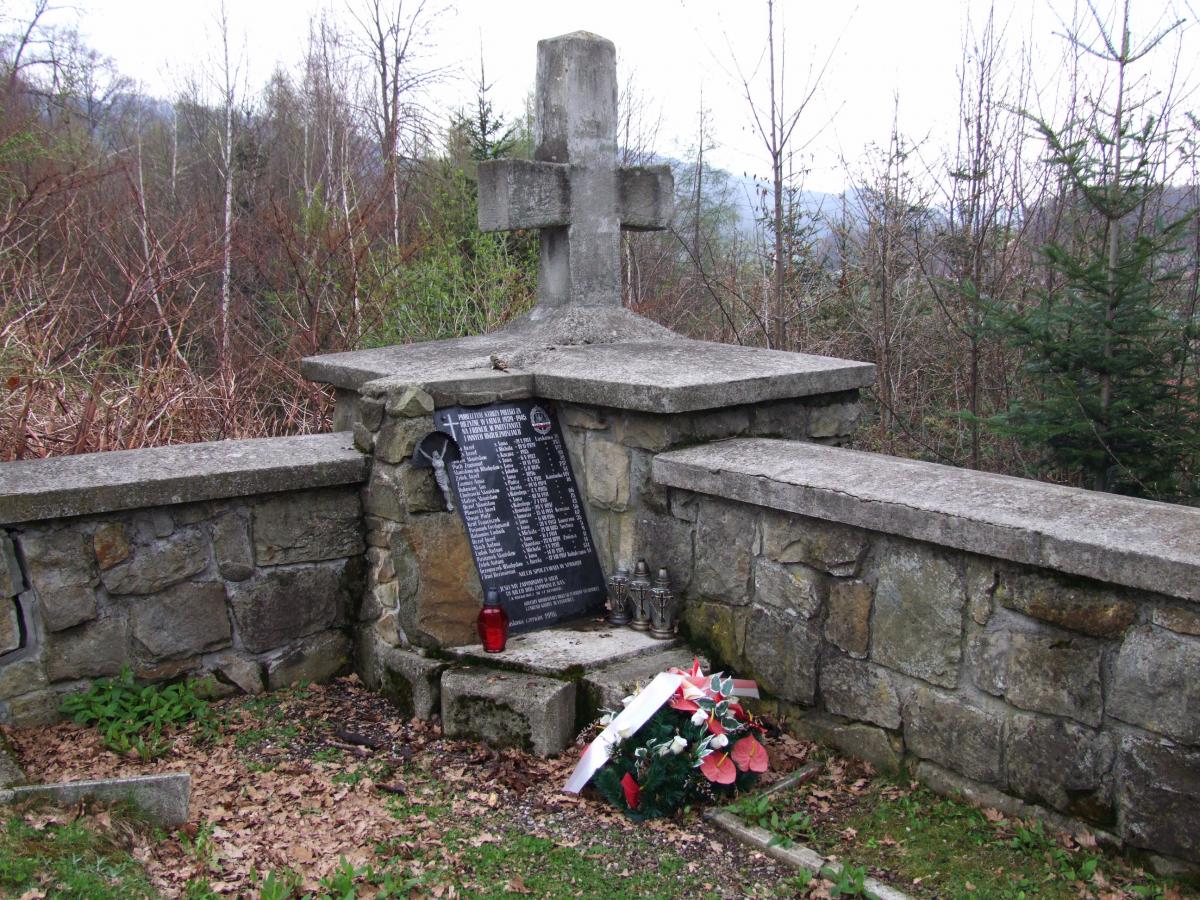 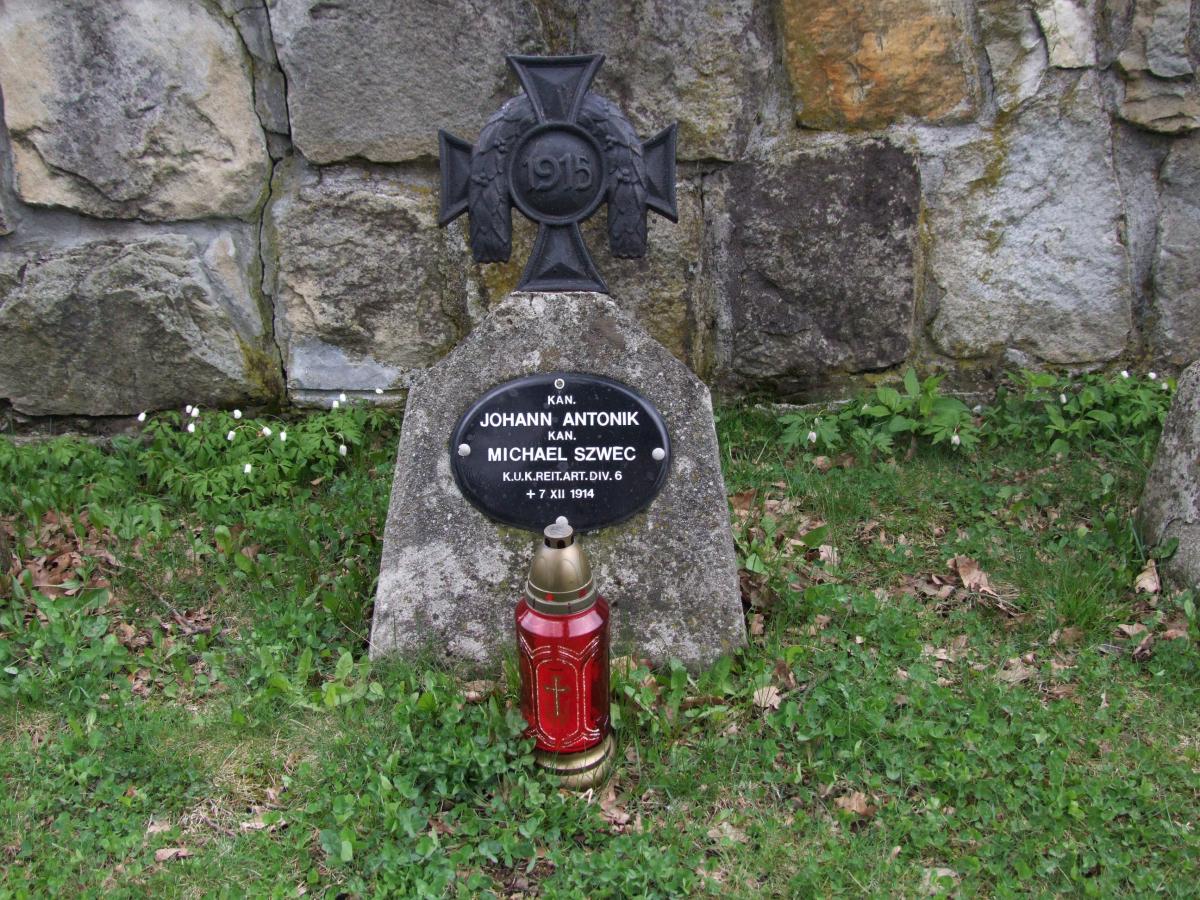 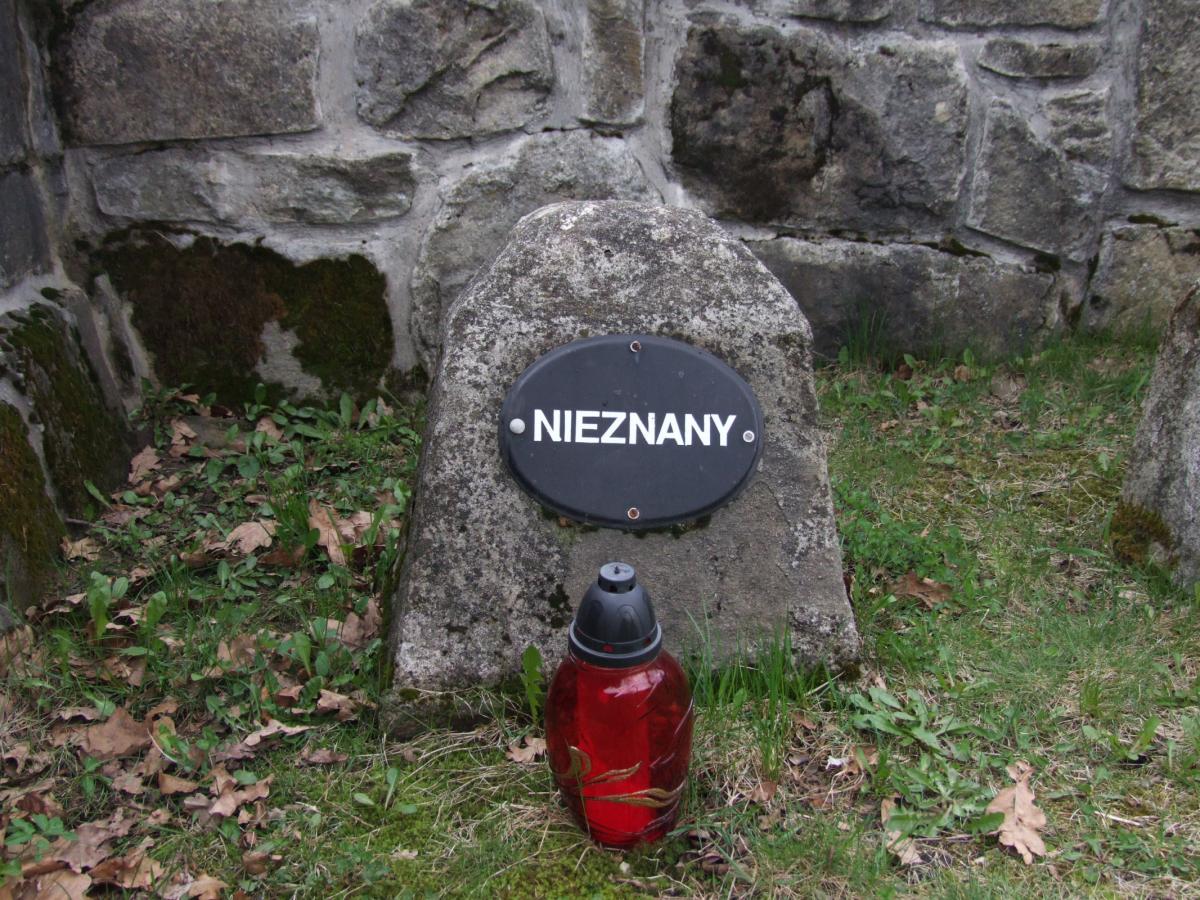 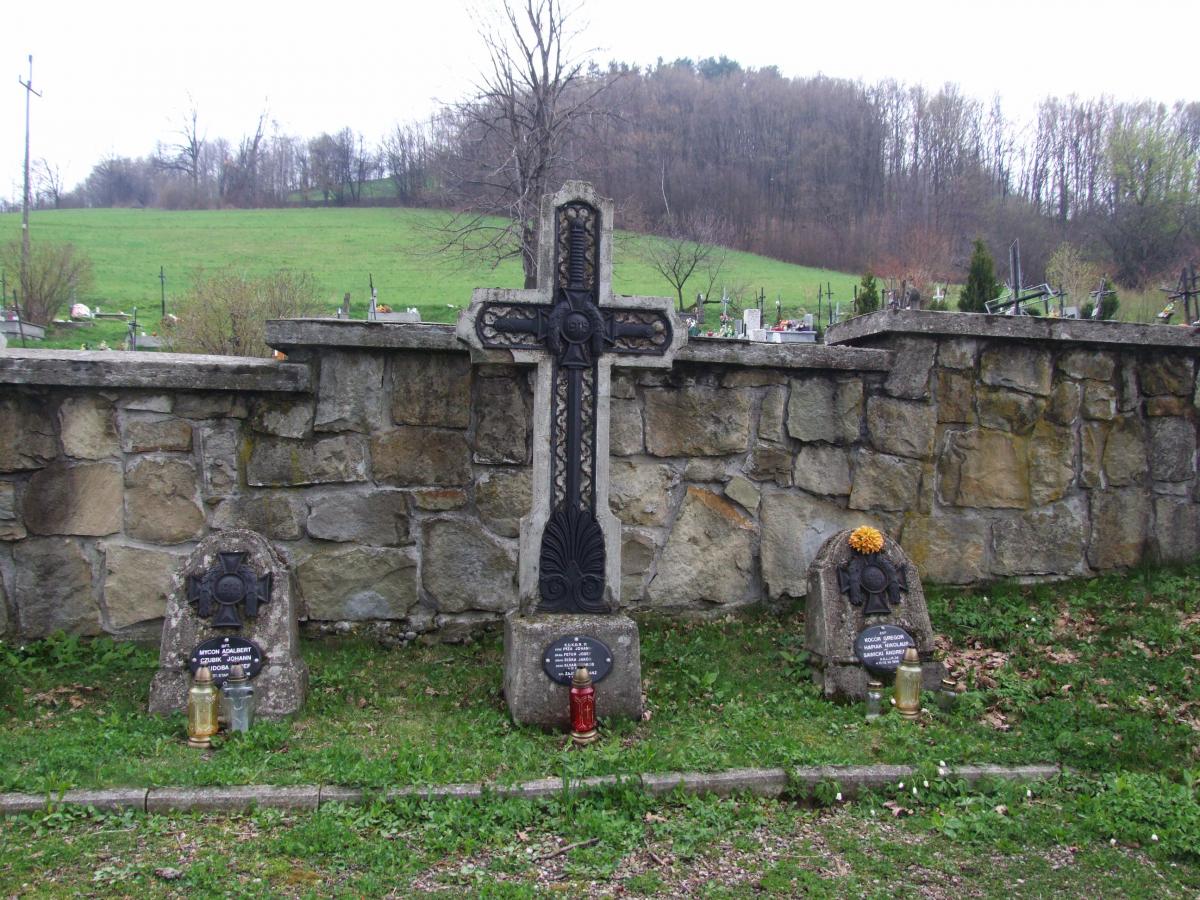