Light the virtual candle
gallery
Edit the description of the cemetery
add photos
number of votes 0
A beautiful cemetery
Return to the main page
War Cemetery No. 375 - GdĂłw - an Austrian war cemetery from the First World War in the city of GdĂłw in the Wieliczka poviat, Lesser Poland Voivodeship. It belongs to the X (Limanowa) Circle of the Cemetery Graves C and K. Commandant's Office in Krakow. It is one of 400 cemeteries of this branch, of which 36 were built in the Limanowa district. [source: Wikipedia, 2058544]
Description of the cemetery
It is located in the northern part of GdĂłw. Gustaw Ludwig designed it. It is a small quarters in the parish cemetery next to the Mound of the Insurgents of 1846 and a monument commemorating the fallen in September 1939. This place is the main place of national memory of the inhabitants of GdĂłw. The cemetery was made on a rectangular plan with dimensions of 10 Ă— 6 m. The fence consists of low concrete pillars connected with massive metal pipes. Entrance through a very low single-leaf metal gate. On the opposite side of the cemetery a massive concrete cross with a height of 2.6 m with an inscription board. On the square of the cemetery, 9 radial tombstones with cast-iron crosses with a laurel wreath. On the tombstone of a soldier of the Russian army, it is an Orthodox two-armed cross, on the remaining eight tombstones, soldiers of the Austrian army are one-armed Maltese crosses [source: Wikipedia, 2058544]
the fallen
He was buried 12 soldiers of the Austrian army with 34 IR, 55 IR and 80 IR infantry regiments, from the 3rd regiment of shooters and the 30th heavy heavy artillery regiment and one Russian army soldier from the 166th infantry regiment. Of the names known, 12, one is unknown. Ulan Paul Wojtowicz from the first Uhlan Regiment died in 1917, Corporal Franz Kopera from the 2nd Regiment of Artillery Forteczna, died on January 2, 1915, all others died during heavy fighting in the area of GdĂłw in November and December 1914. [source: Wikipedia, 2058544]
The fate of the cemetery
The Austrians built the cemetery in 1916. In 1917, a lunar by Paul Wojtowicz was buried in the cemetery, but the place of burial is unknown. On the 50th anniversary of the construction, in 1966, it was renovated. New fence pipes were installed, a new gate was opened and concrete canopies were rebuilt on the fence posts. Under the central cross a new inscription talon was installed in Polish (the original one was damaged and in German) and the missing cast-iron crosses were complemented. In 2018, the cemetery is renovated and is in very good condition, however, the tombstones system differs from the original one. Drogomir, based on the surviving plan of the cemetery, states that a serial Russian soldier, Avras Trochin, was buried in grave no. 10 (the first to the right of the gate), while the two-armed Russian cross is on another tombstone (in the corner of the cemetery). According to the plans, it was to be the tombstone of Josef Walkner from the 2nd Imperial Rifle Regiment. In addition, there were 11 tombstones, currently only 9. Part of the cast iron crosses, instead of 1914, has the date 1915. The replacement of the tombstones and crosses probably occurred during the renovation in 1966. At that time, probably not destroyed two graves. The boxwood and barberry planted on tombstones are contemporary. [source: Wikipedia, 2058544]
gallery
⮜⮿⮞
Wikipedia, Cemetery in Gdów, Self-published work, User:Zetpe0202, World War I Cemetery nr 375 in Gdów 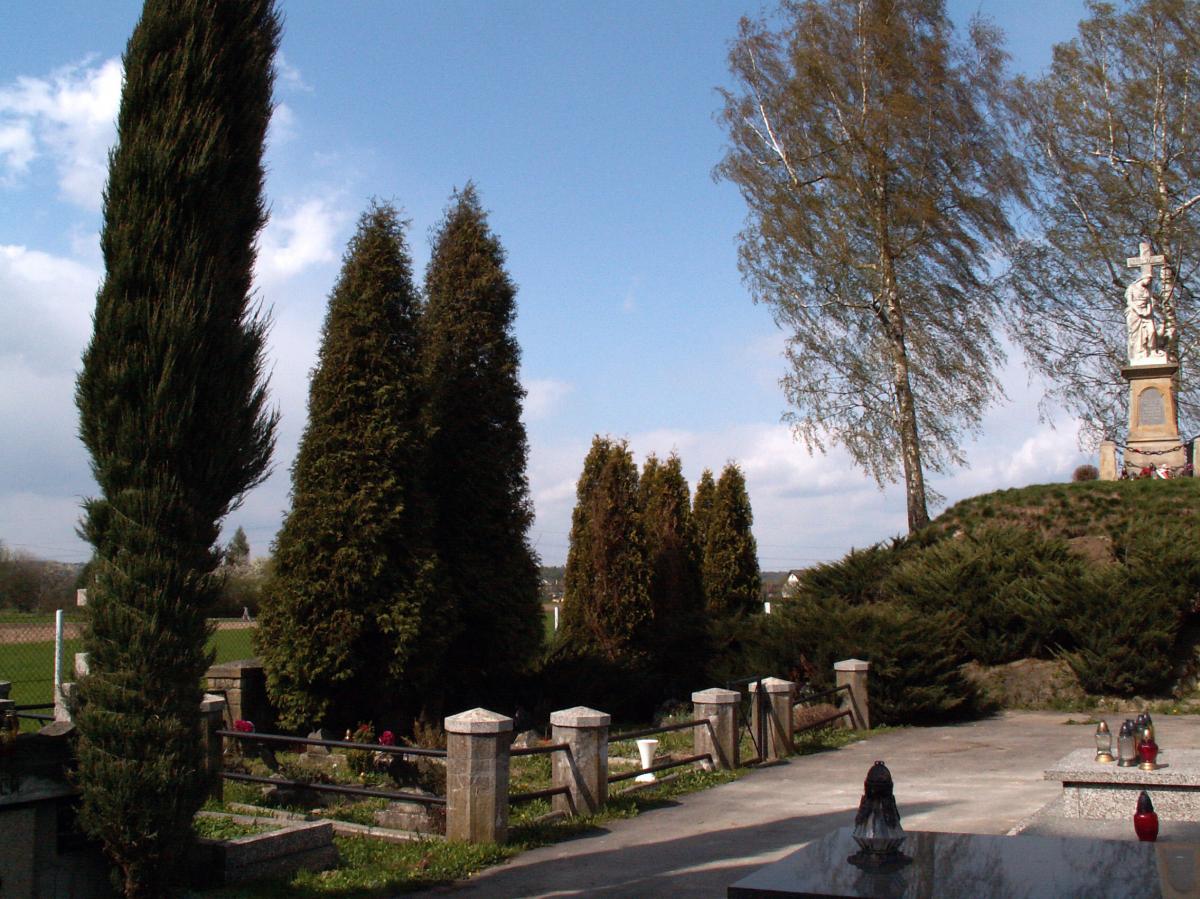 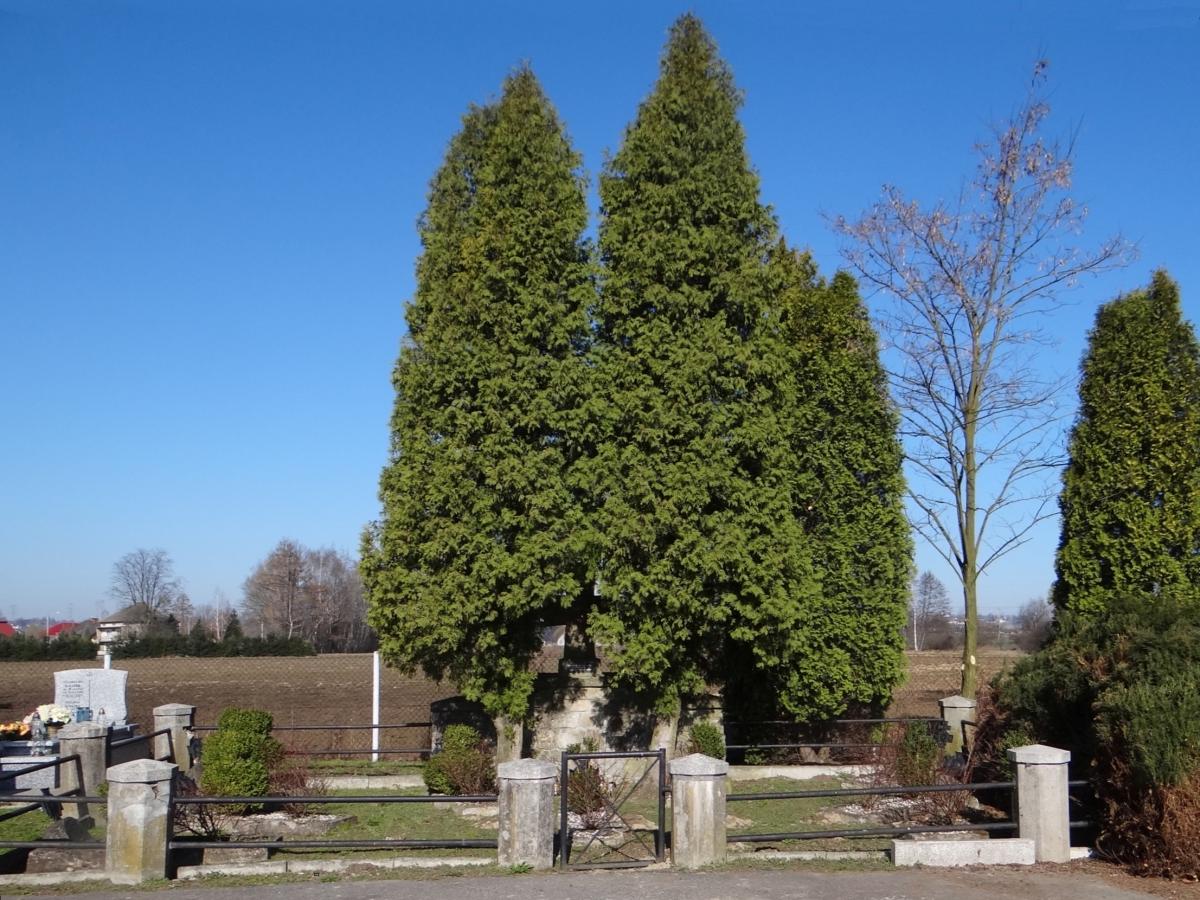 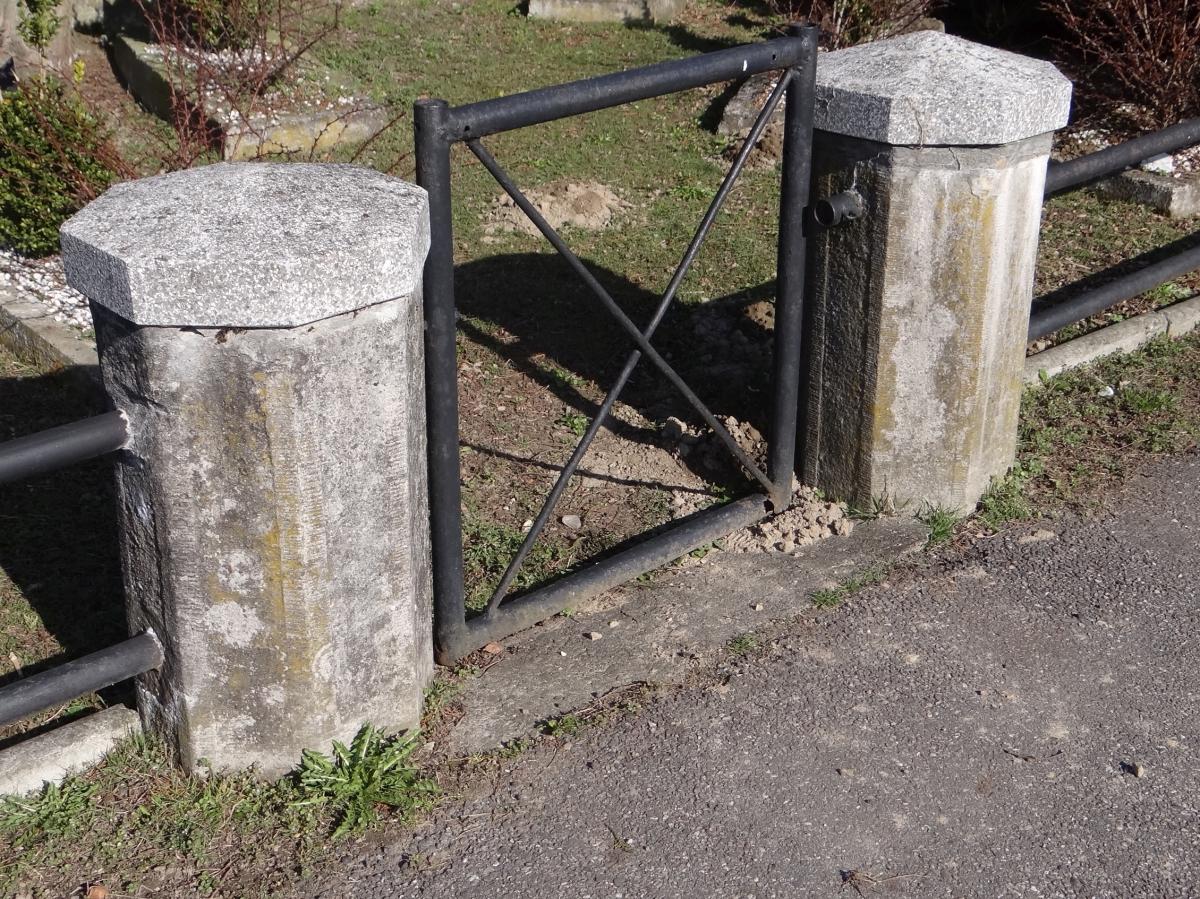 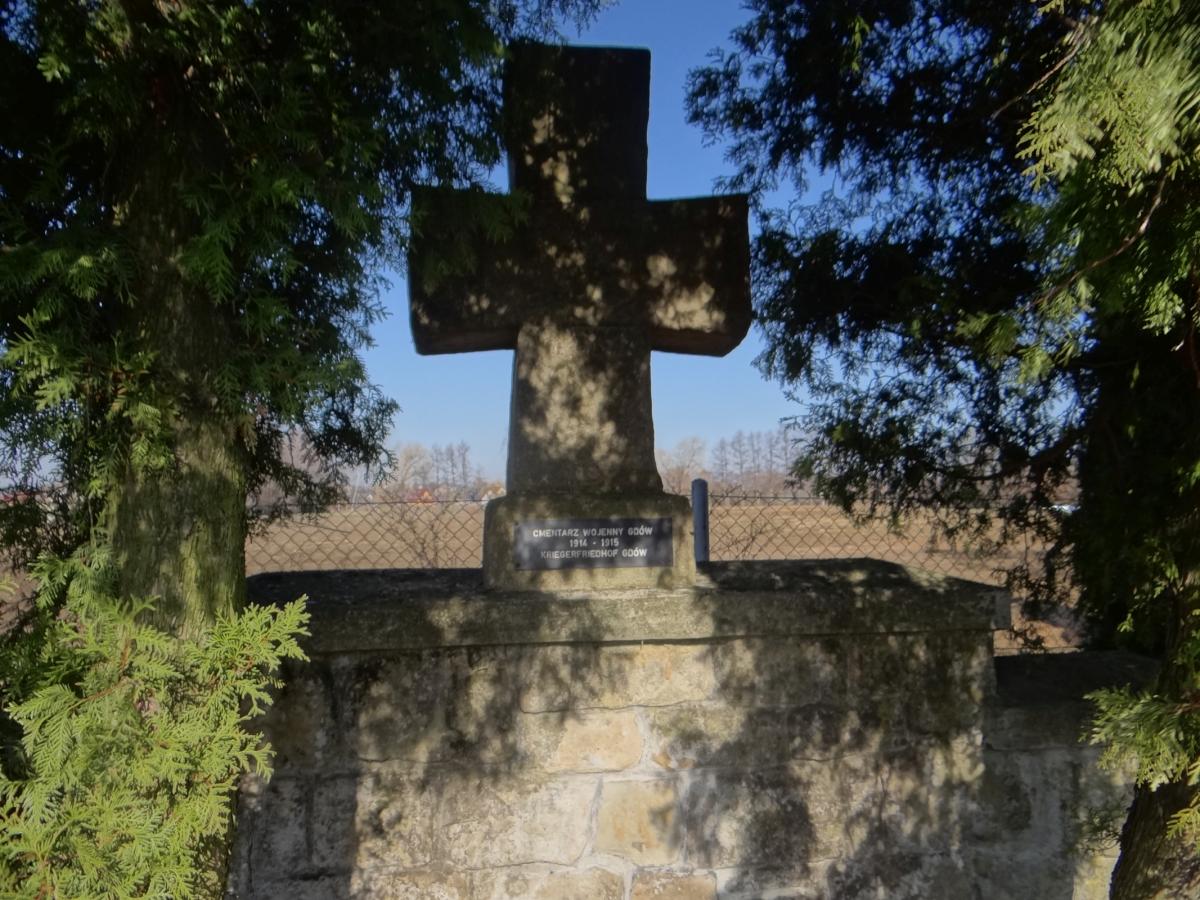 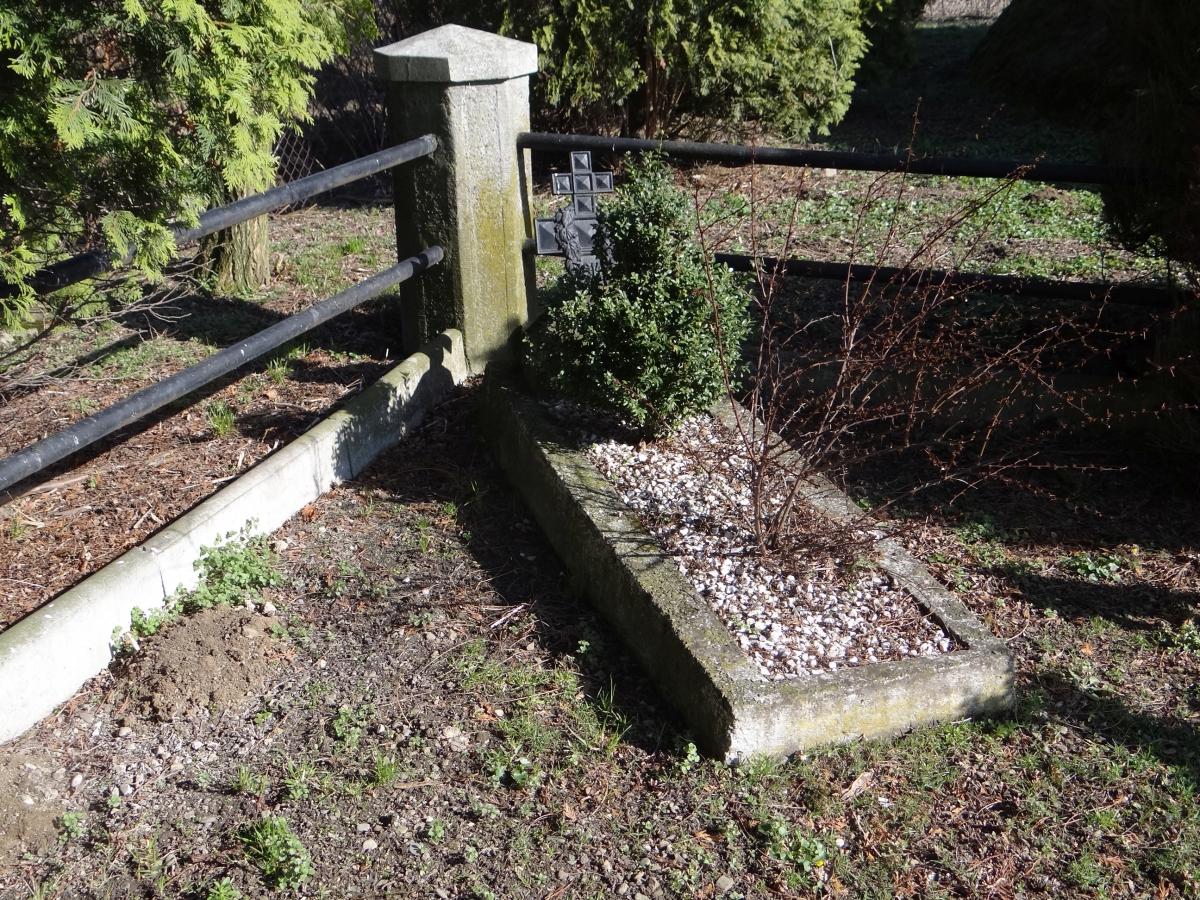 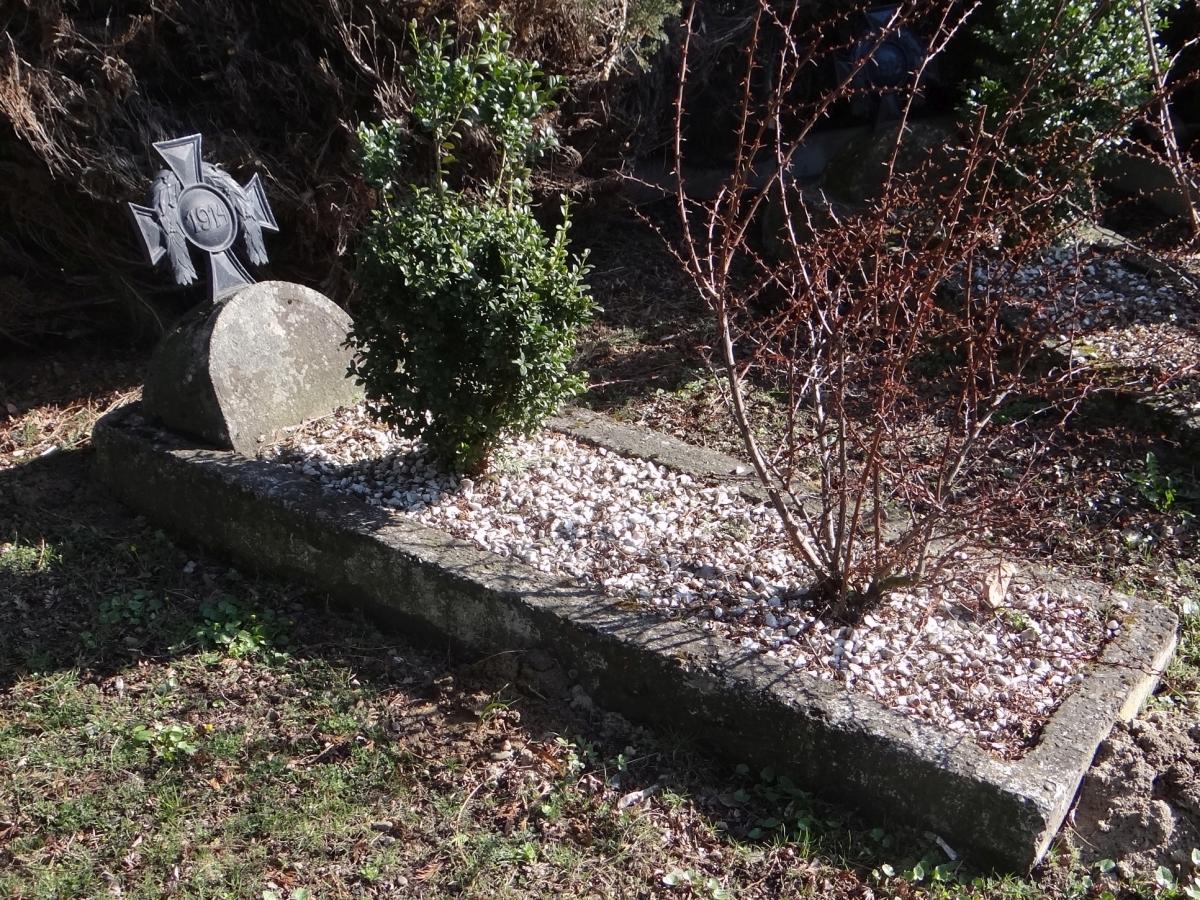 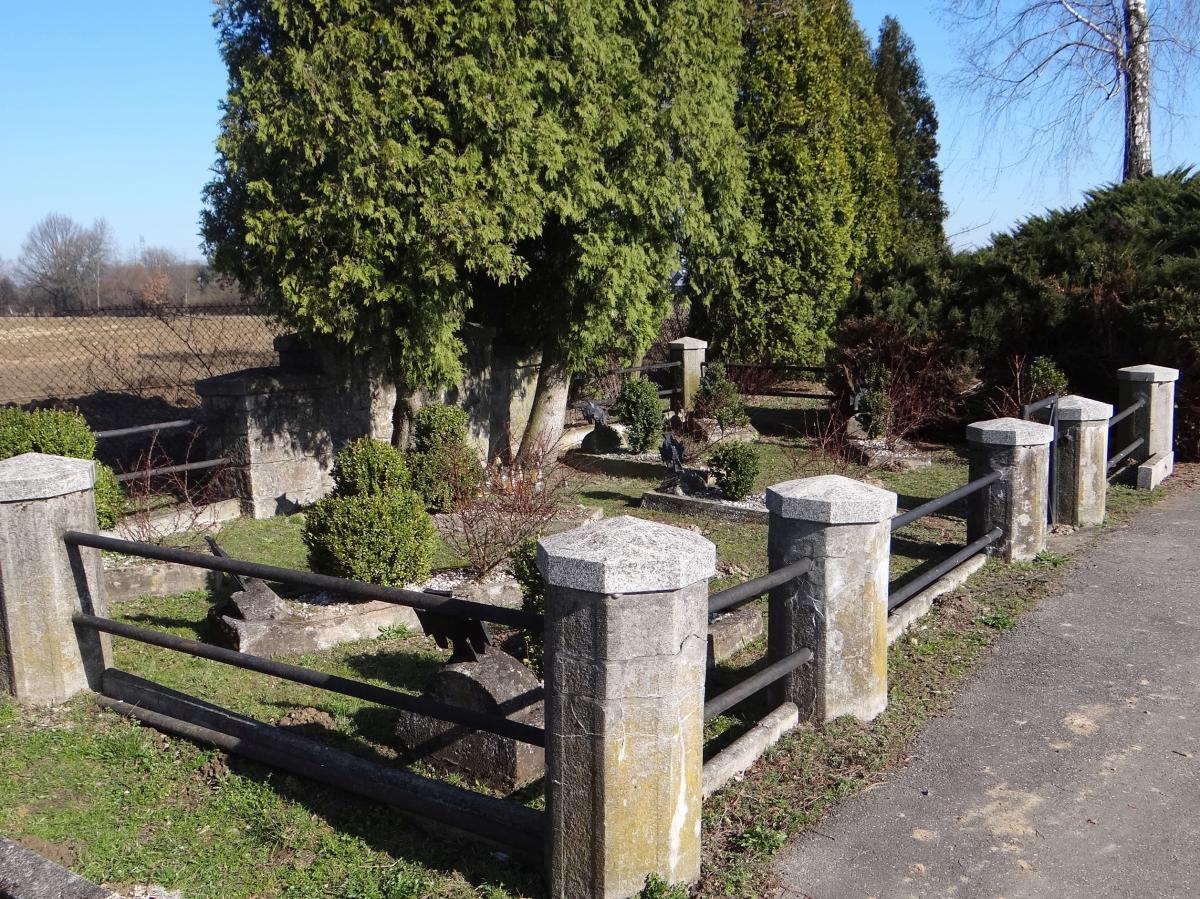 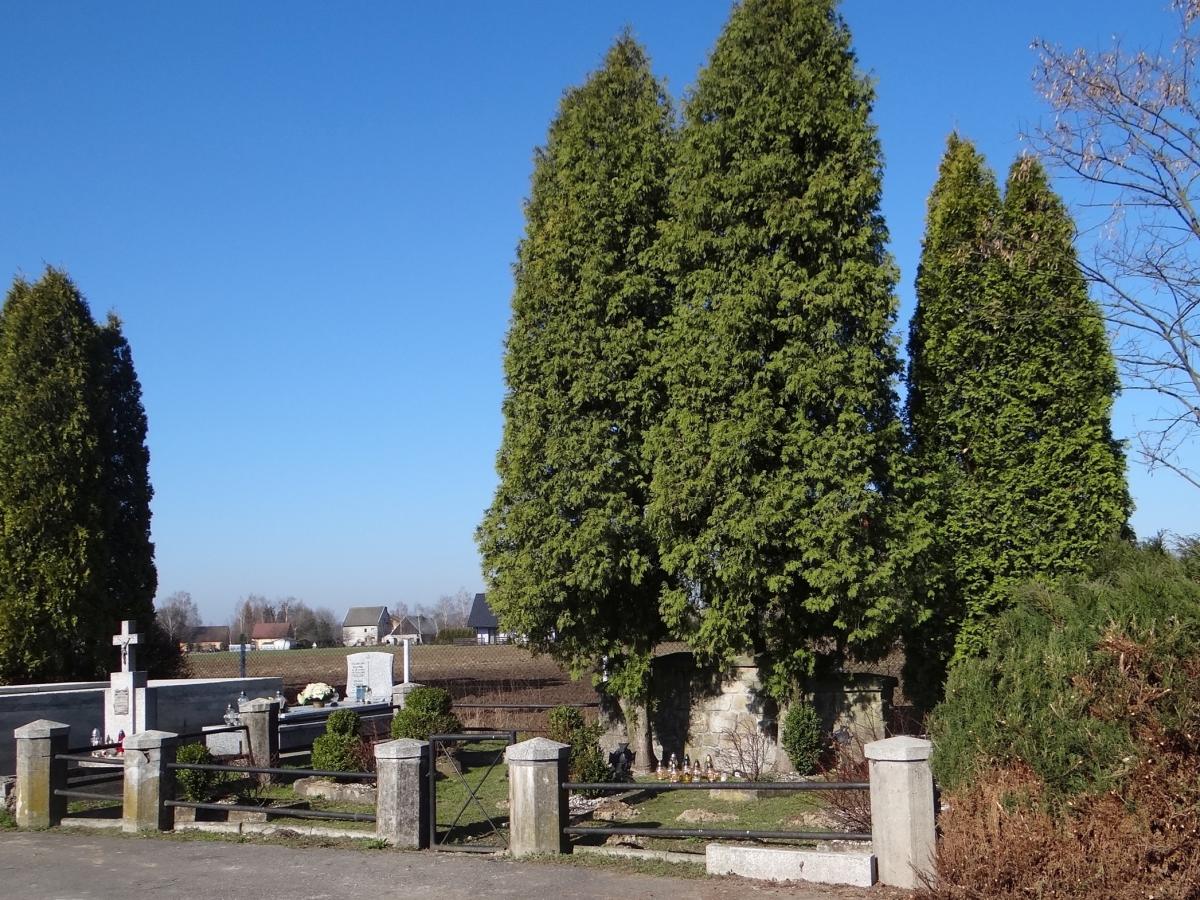